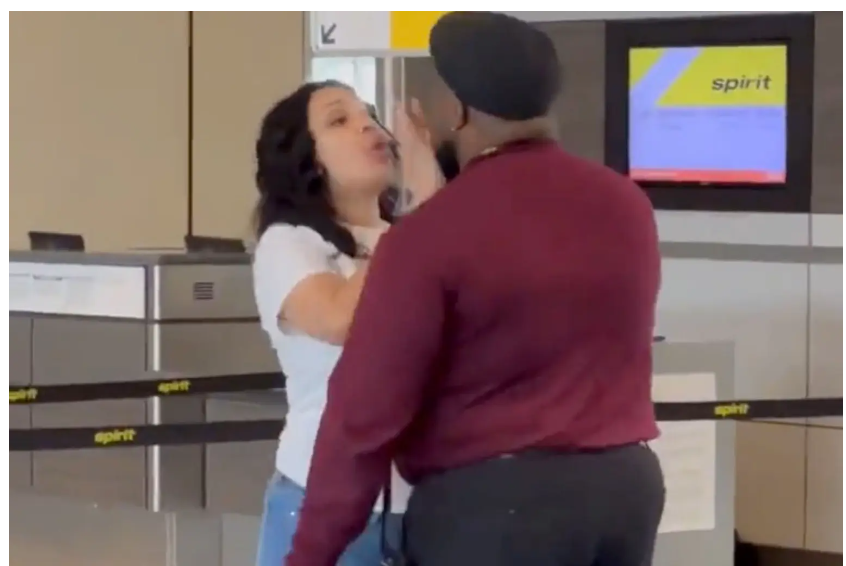 De-escalation tips from recent incident between a Spirit airline agent and woman, there are several de-escalation tips, techniques, lessons from the recent viral tik tok video of an incident in Texas between a Spirit Airlines agent and a woman.  How could this situation been mitigated and even totally avoided? Everyone had a part to play, and it would have taken self discipline and self awareness in the moment.
The action has already been going on for a few before the video picks it up, and I have no idea what started it.  The airline agent is seen using his size and voice to intimidate the woman. He can be heard telling her not to get in HIS space, all the while making a point of getting into HER space. That is antagonistic and confrontational.  If you are so offended and put off by someone in your space, why would you go and do it to them?  How is that de-escalating the situation?  No, he was trying to be imposing, threatening, and was hell bent on making sure she acknowledges his “superiorness”.

The woman can heard telling him to get away from her, but she does not try to walk away, though in this case I don’t think he would have let it go either. She even pushes him away because he gets too close to her, but he uses that as an excuse to threaten her not to touch him again, and then steps up to her again.
The woman unfortunately is unable to disengage herself, and then when she had the chance to walk away, even run away when by-standers began to intervene, she ended up physically assaulting the airline agent by reaching around a by-stander and striking the agent in the head.
The agent goes after her, striking her once in the head but she is able to get away.  More by-standers get involved trying to de-escalate the situation and separate the agent and woman, and the agent now puffs himself up and acts aggressively towards by-standers.
Both the agent and the woman appear to have strong, “I must win” personalities and egos.
Just wow.

1) For the airline agent: Assuming you are aware that lately EVERYONE is on edge and so easily offended and angry all the time, you can mentally prepare yourself to encounter and deal with such people before the start of your shift simply by telling yourself to expect to have to deal with them! And tell yourself that you CAN effectively handle them, and that you will NOT allow yourself to become offended, frustrated or impatient with customers, clients, passengers, co-workers, and etc… !!
Whatever it was that started the situation, could you not have just walked away and let a co-worker deal with the woman? 9 times out of 10, a situation will de-escalate with a different face, a different tone of voice, and a different attitude! There is no law, rule, regulation, policy or procedure that demands that you stay in contact with a loud, rude, obnoxious person.  Avoid getting into people’s personal space, it is antagonistic, threatening, and gets you in range of their fists!
Get your pride and ego out of it, you are NOT going to convince the woman of the errors of her ways, especially with the attitude, body language and tone of voice you adopted. Long, slow deep breath, assess the situation and options you have.  Develop the self discipline and self control to avoid believing you MUST “win”, must have the last word, must change their behavior, or thinking, or whatever.
In this situation, whatever it was that started it, handing the woman over to a colleague and walking away to collect yourself would have been a good de-escalating plan to try and execute.

2) For the woman: So you feel disrespected by the agent, could calling a manager over have mitigated and even avoided this whole scene?  If the customer service was so bad, so rude, choosing to be standing there acting the fool, calling people names and so on, is not likely going to make the situation any better.  More often than not, calling over a supervisor and telling them what the problem is will effectively de-escalate a situation between you and an agent/employee.  Walking away to call a supervisor or manager BEFORE it got to the point where the agent got into your face would have been more effective in de-escalating the situation.  Long, slow, deep breath, assess the situation and your options.  Is it possible the agent was having his own bad day and that was why he said or did something that was rude?   Don’t take things so personally!!  Everyone is so angry these days, don’t allow yourself to be part of the problem! Just let it go, move on with your day and your life, and if it was that bad, just complain to a supervisor!
When you allow yourself to get frustrated and offended, you only end up doing and saying things that will escalate the situation, and taking a moment to breath and assess the situation in this case might have prevented you from choosing to strike the man in the head first instead of getting away when by-standers began to intervene.  Trying to push the agent away from you was totally justified and understandable, but then you completely flipped your role and became the aggressor by choosing to attack and assault.

In conclusion, get your pride and ego out of it, stop believing that you MUST “win” or have last word, stop thinking you are going to change someone’s attitude, thoughts or ideas by being loud and antagonistic towards them.  Don’t let yourself get sucked into staying in a confrontational situation, call a supervisor over, ask a colleague to take over for you.  Take long, slow, deep breaths, assess the situation and your options.  Just walk away.