How did the Grand Rapids, MI police officer try to De-escalate and control the situation? 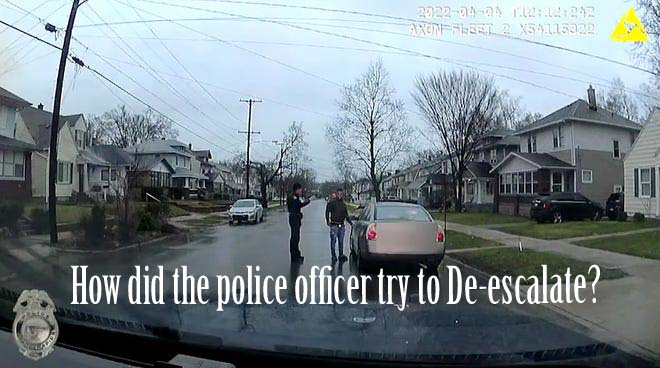 How did the Grand Rapids, MI police officer try to de-escalate and control the situation?  Sadly and tragically, on Monday, April 4, 2022, a Grand Rapids police officer made a traffic stop which ended up with the fatal shooting of the driver.  Here’s a link to the press conference and release of 4 videos of the incident.

You can argue, debate and pontificate all day and all night long about whether the shooting was justified, BUT you can NOT say the officer did not try to De-escalate the situation!

The 2 most commonly used words by police officers when trying to de-escalate a person are “STOP” and “DROP”.  Compliance to any one of those instructions will result in tensions beginning to go down.  And when a person in authority, such as a parent, or supervisor, or police officer gives a lawful instruction and the subject fails to comply, there is ALWAYS an escalation of response.  In the case of a parent, the child is grounded or spanked or has their phone taken away.  A supervisor will discipline an employee by “writing them up” or may fire an employee.  A police officer has to go up the use of force continuum depending on the situation.

How did the Grand Rapids, MI police officer try to de-escalate and control the situation?  The officer initiated a traffic stop on a car that had a bad registration plate on it, driven by Patrick Lyoya.  Patrick immediately jumped out of the driver’s seat, an act that always immediately raises the alertness and anxiety level of any and all police officers!  The officer immediately instructed Mr. Lyoya to stay in the car, 4 times in fact, but Mr. Lyoya just stood there.  So right from the get go we have a driver who is not complying with a lawful instruction and command. 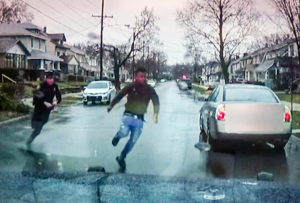 How did the Grand Rapids, MI police officer try to de-escalate and control the situation?   Mr. Lyoya runs from the officer who quickly catches up and wrestles Mr. Lyoya to the ground.  Mr. Lyoya continues to resist, struggle and not comply when told to “Stop” FIVE times!  So by now the officer has commanded Mr. Lyoya to simply “STOP”, EIGHT times.  What if Mr. Lyoya had just simply done as he was told, just stopped and surrendered, at any of those moments?  He’d have got his tickets, maybe gone to jail for a few hours till he paid a $100 bond, and still be alive.  Thousands of people across the country were stopped by police prior to April 4th, people of all colors, shapes and sizes, and nothing dramatic ever happened, because the vast majority of people were civil and compliant to lawful authority and instructions.

The officer struggled with Mr. Lyoya on the ground, demanding Mr. Lyoya to put his hands behind his back 3 times, but Mr. Lyoya continued to physically resist and by non-compliant.  The officer calls for backup, and then tells Mr. Lyoya to “STOP” and “Stop resisting!”.  But Mr. Lyoya fails to comply.  HAD Mr. Lyoya stopped resisting and surrendered at this point, he would have just got a ticket, gone to jail, and be alive.  But Mr. Lyoya continues to struggle, fight and resist, escalating the anxiety level of the officer who is running out of energy and strength trying to control and subdue a stronger and heavier subject, who outweighs the officer by around 30-40 pounds!

How did the Grand Rapids, MI police officer try to de-escalate and control the situation?  There are no guarantees when trying to successfully and effectively de-escalate a situation.  The level of anger in a person, the level of intoxication, any mental and cognitive disabilities and whether or not the person has an “agenda” can affect how successful or effective you are in de-escalating a situation.  In this case, Mr. Lyoya was bigger, stronger, and had no intention of going to jail again or even getting another traffic ticket, that was his “agenda” and reason for resisting and failing to comply.

Argue, debate, and pontificate whether or not the shooting was righteous and justified, but do not dare say the officer did not try to successfully and effectively de-escalate and control the situation, first verbally and then physically.  Mr. Lyoya’s significant contributing factor to this tragic incident was his own behavior and actions, which guided, lead and turned what would have been a ticket and a few hours in jail into a fatal shooting.