Your appearance, the A in your ACE, will do more to effectively de-escalate 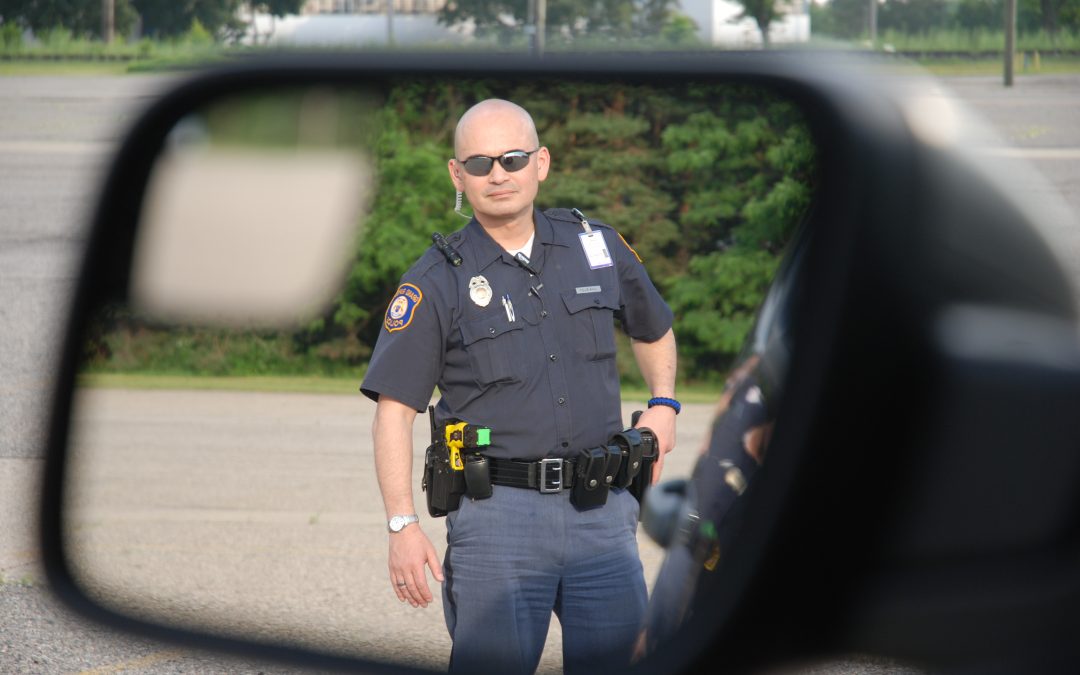 Your appearance, the A in your ACE, will do more to effectively de-escalate a situation.  A guy I know from church recently may have proved one of my main precepts: That your appearance can shape another person’s thoughts, feelings and actions without a word being spoken. Often times to the point that they create their own tunnel vision.

I recently re-posted a post on my personal FB page and I used this black/white photo to illustrate it. It is a posed photo of me in car’s side mirror, taken a few weeks before I retired in 2015. The original post is about how police equipment has changed through the years due to changes in society, that police began with just a whistle but evolved to having bullet proof vests and guns because of changes in society and the people that police encounter. That a police officer’s gun will remain in the holster until it is needed.

The guy asked, “Is having your hand on your pistol a common non-threatening de-escalation tactic?”… I figured he was kidding with me, and I responded with an LOL and pointed out that it is a posed photo of me. He replied, “the word ‘intimidation’ comes to mind.”. I answered with a short explanation.
Now, I personally try to use a lot of punctuation and emogis because everyone knows that without emojis and so on, it can be very difficult to determine a person’s context and attitude based solely on written words, but the words, grammer and punctuations used can give you clues. He did not respond to my comments and replies to his comments, which would have helped giving his comments more context, but to date he has not.

So… Based on the fact that EVERYONE else who commented on the post did so in response TO THE POST, but he is the only one who responded and reacted ONLY to the photo, I felt it was a pretty good bet that he got himself completely hung up on a photo, took it out of context and never bothered reading the post, or was not able to really understand the post because he was already deep into his self-induced tunnel vision because of the photo.

Your appearance, the A in your ACE, will do so much more to effectively de-escalate a situation than anything you could say or do. First impressions are lasting impressions and you have only ONE shot at it, so be VERY aware of how you appear when making contact with a person who may already be stressed and agitated, so that you do not inadvertently escalate the situation! Your facial expression, your body posture, the way you walk up to a person, will altogether tell another person your attitude, level of professionalism, level of competency, and simply whether or not you are “cool”.