Could a social worker have stopped Ma’Khia Bryant? 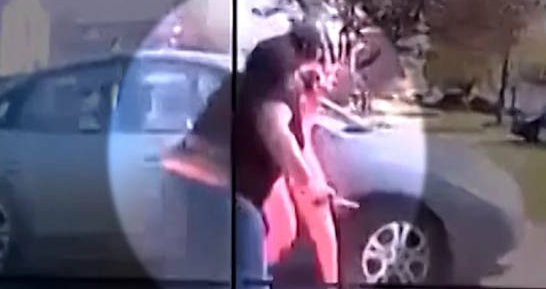 Could a social worker have stopped Ma’Khia Bryant?  A very large number of people have been reposting the attached image on instagram, and it is just further proof that just because a person has PhD or a Masters degree it absolutely DOES NOT mean they know diddly squat about the real world. Years spent in a library and researching online DOES NOT, in ANY way, effectively replace ACTUAL EXPERIENCE. 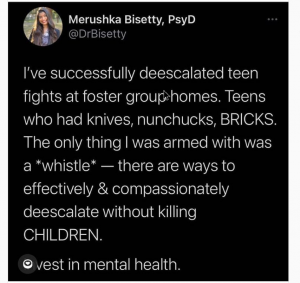 The post is very misleading, and there will be times when NOTHING you say or do will effectively and successfully “de-escalate” a person or situation, and one of those times is when the person is at such an emotional peak and spike that they are being violent to people and things.

Based on my experience with a childrens home here in Grand Rapids, what this Dr. does not point out is that the reason she has been issued a whistle is to sound the alert that she is in danger and needs others to come to her rescue because she is being attacked! Other staff members then pile in and physically stop the attack.

LIFE is *NOT* a game where everything stops “at the whistle”, and I am saddened and sickened at all the people who reposted and added their comments that they also believe that a whistle would have stopped the murderous attack on that girl in Columbus.
If you were being attacked with a knife, or a brick, or just plain being savagely attacked, would you want your colleagues and potential rescuers to just stand there and blow whistles?

Could a social worker have stopped Ma’Khia Bryant?  One female nurse who reposted that post also added her comment that she also has worked in a group home for teens, described herself as 5’3″ and has successfully de-escalated 200 pound men who were throwing around tables and chairs, that it “usually just requires a soft voice, let them vent, and then work with them to come up with solutions”.

I absolutely agree with her… WHEN all you’re are dealing with is a person venting their rage and issues onto inanimate objects that are usually covered by insurance!! It is VERY different when you have a person savagely hurting another person, and I personally do not believe that YOU are going to appreciate someone using a soft tone of voice, and letting the attacker continue to vent by continuing to stab or beat you.

In fact, NOT ONE of the reposts and added comments even mention how they effectively and successfully de-escalated a person who was in the act of savagely hurting another person!

Could a social worker have stopped Ma’Khia Bryant?  When you have an active, in progress, happening right now, act of extreme violence that will gravely injure or kill another person, you need to act NOW to stop it.
NOT blow a whistle. NOT use a soft tone of voice. ABSOLUTELY NOT allow them to continue to vent.