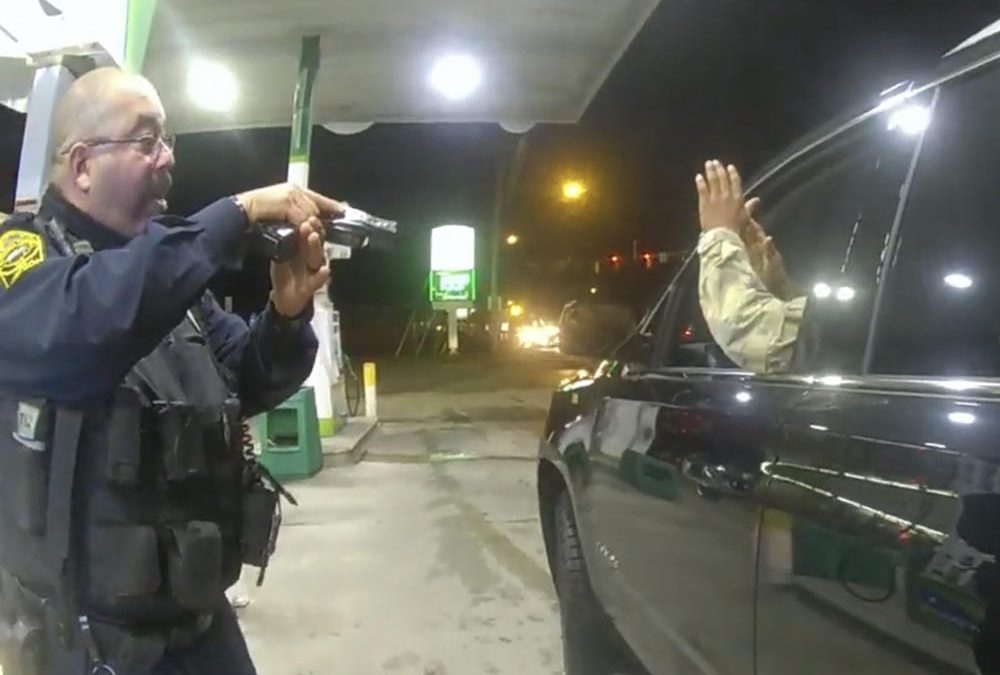 The Lt. Nazario traffic stop incident in Windsor, VA.  A traffic stop at night, and the vehicle is slow to stop, now what?  I worked road patrol for 20 years, 15 of them on night shift. There were several instances where I’d initiate a traffic stop in the middle of the night, and the driver would activate his hazard lights or turn signal, which would indicate to me the driver was aware I was trying to stop him.
But the driver would continue along, at the speed limit, so I would call out over the radio that I had a car that was “slow to stop”, to get backup coming my way. I was aware that drivers were being taught to find a well lighted area to pull over, so I would scan ahead and see a gas station or well lighted parking lot and just wait to see what the driver would do… And sure enough, without fail, the driver would pull into the well lit area and stop.

In my experience, if a driver was going to flee and “elude”, they would hit the gas as soon as I activated my emergency lights and they’d take off. And if they were going to bail out and run they’d pick a dark area and often dive out of the car before it was completely stopped.
What happened with the Army National Guard Lieutenant and the 2 Virginia police officers was horrible, and emphasizes the critical need for officers to stay flexible and avoid creating their own tunnel vision. Once the primary officer decided that the Lt. was trying to “elude” him, it set certain gears in motion in his mind on how to proceed next based on his training and experience. His stress level shot up, and because he was convinced that the driver was “eluding” him, he ignored the fact that the driver had not sped away but continued at the speed limit and then pulled into a well lit area. He ignored all that because of confirmation bias, he was so convinced that the driver was trying to “elude” him that he ignored evidence that he may be very wrong.

This is why I strongly emphasize in my training seminars NOT to predetermine how you will react and respond to certain situations and scenarios to avoid over-reacting and inadvertently escalating a situation. Have an IDEA of how you’d like to respond and react BUT STAY LOOSE AND FLEXIBLE!!!! AVOID LOCKING YOURSELF INTO A COURSE OF ACTION THAT MAY BE VERY WRONG!
I saw it during my career, and I still see it from time to time in my training seminars. A student will react and respond to a scenario in a certain way, basically mishandling it, and when asked during the critique phase why they did what they did, they ALWAYS respond that they had told themselves , and over and over again, that if “A” happens, they would do “B”… But in reality folks, you may find yourself having to do “F” and “K” first before going to “B”.

Windsor, VA, is a very small town, they only have 3 road patrol officers.  I think the officers in the Lt. Nazario incident allowed themselves to get sucked into a course of action that ended up being very wrong, and they both lost situation awareness and self discipline as evidenced by the both of them yelling conflicting demands and orders to Lt. Nazario, which only further added to the confusion and amping themselves up that much further. It can be tough sometimes, depending on the situation, but only ONE person in your team should be doing verbal commands to the subject.

Take a deep breath, slow down, continually and constantly assess and reassess the situation to make sure you notice cues and clues that YOU need to throttle back and de-escalate, because if YOU lose self control, you are pretty much guaranteed to lose control of the situation.

Link to articles on conflict de-escalation