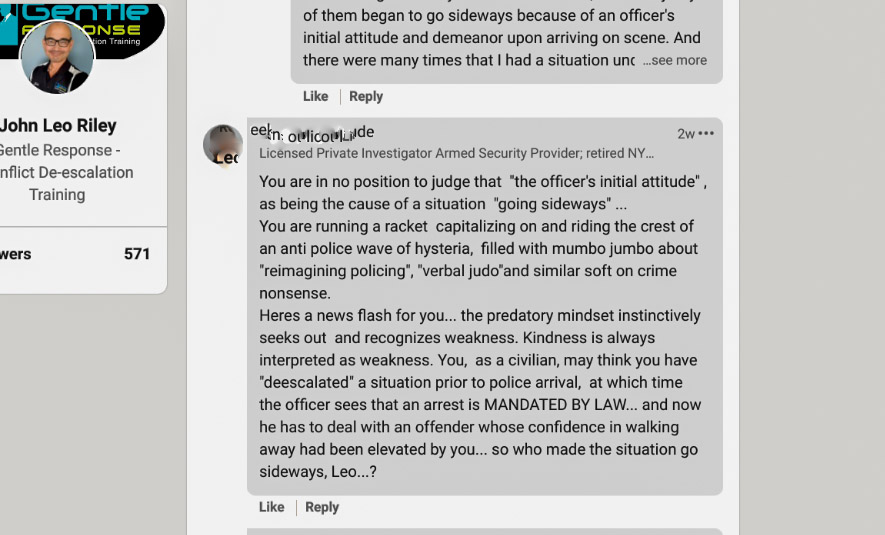 A stranger “went off on me” a few weeks ago, a stranger who clearly took offense to my post that not ALL situations require police to arrive and handle things with a heavy hand. I was really surprised to note that this person is also a former police officer with such a strong negative emotional reaction to my post. 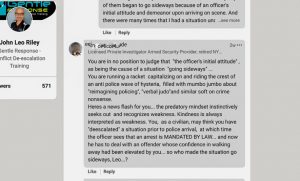 I responded and after going back and forth momentarily, and giving him ample opportunity to simply check my profile, background and experience, it was obvious to me that this person is not at my level so I broke contact with him. It is one thing to disagree with me, which in itself is no big deal, but it was obvious from the “lecture” he gave me, his choice of words and the “tone” of his last comment (that I share above) that he was way too blinded by his emotions and sense of righteousness to even be professional enough to take a moment to check my profile, which I believe possibly could have changed the context of my post for him, and would have changed how he worded his “disagreement”. Calling me a civilian and calling me by my middle name was clearly and obviously done to be confrontational, antagonistic, and argumentative.

Am I wrong in my assessment?

Not at all what I would expect from a professional with any character, ethics and integrity, and I would dare say this person was one of those police officers who handled everything with a heavy hand and intense self righteous “I am right and you are wrong” attitude.

Teaching points – Do not let yourself feel offended, you only increase the likelihood that you may do or say something that will escalate the situation! Had I not been a person with years of experience with dealing with persons such as him, I could have found myself going down a rabbit hole of comments and counter comments that would have gone no where, accomplished nothing, and would have been an absolute waste of time and effort.

Be aware that rude, obnoxious, confrontational, antagonistic people are not an “in-person”, “face to face” phenomena and situation only! Such people can not help themselves and will project themselves in print by their posts and comments across the board on all social media platforms! Do not engage with them, otherwise you greatly risk finding yourself feeling offended by them, and then YOU risk doing or saying something that escalates and keeps the interaction going! Just let it go!

Be able to agree to disagree, and recognize that you are most likely NOT going to change anyone’s mind so be very careful to avoid getting sucked into what becomes a worthless argument and a waste and drain of energy and mental/emotional strength.