Can you de-escalate a knife attack? 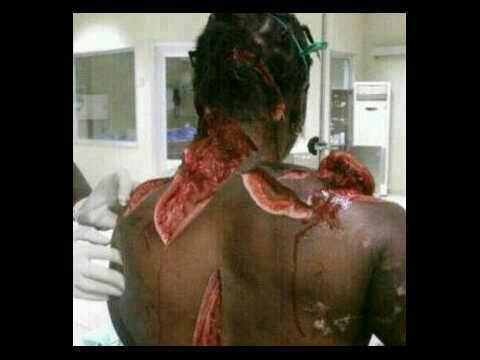 Can you de-escalate a knife attack? Once again the uninformed, misinformed, misguided and criminals are rioting and looting in Philadelphia in the name of reform and justice after a man was shot and killed by police officers. A cell phone video of the incident clearly shows him very aggressively advancing on 2 police officers who are clearly trying to back away from him, they are giving loud verbal commands for the man to STOP and DROP the knife in his hand. Unfortunately for the man, because the officers absolutely do NOT want to look like the man in the cover photo of this article if they survive, they shot at the man to stop him from hurting them or killing them.

Unlike the movies, knife attack injuries on a human being can be pretty horrific and bloody. The injuries on the man in the cover photo can easily be inflicted by a small pocket knife with a “small” one inch blade. You only need a sharp blade to cut. I dealt with a few knife victims during my years as a police officer, as have a large number of police officers around the country. No human being wants to be filleted open. Unfortunately, once again the uninformed, misinformed, and misguided masses are upset because they believe, fueled by public and social media, that there is “one thing” that someone can say or do that will just automatically and peacefully “de-escalate” a person bent on hurting another human being. That is absolutely false, there is no such thing as a single word or phrase or an action that anyone can take that will “de-escalate” another person.

In fact, there will be times when NOTHING you say or do will make a difference at all, you will NOT be able to safely and effectively de-escalate a person or situation. Those situations are usually one of the following –

By the way, think back to the last time you were really angry at someone or something, I mean really angry. Can you think of the one word, or phrase, or action that would have just immediately “de-escalated” you and calmed you down? And yet, the public believes it would be that “easy” to just say or do something to de-escalate a person or situation.

I believe, based on my experiences and observations, that the proper definition of a successful and effectively de-escalated situation or person is lowering the intensity level of a person to prevent a volatile situation from becoming a violent critical incident.

A person who suffers from mental illness and who is attacking people with a knife, or a baseball bat, or a piece of wood 2×4, or whatever can kill and injure just as easily and effectively as a “sane” person who has decided to kill or injure another human being. I have also seen what a hard object, like a baseball bat, can do to the head of a human being, and all police officers will try very hard to avoid being cut by a sharp object or hit by a hard object.

Can you de-escalate a knife attack? No police officer goes to work “wanting” to hurt ANYONE, and they certainly do NOT want to get hurt either! But they know, from experience, that there are and will be times that nothing they say or do can effectively or successfully de-escalate a situation, and unfortunately may need to use higher force to prevent being gravely injured or killed themselves.