Missteps and bad decisions by everyone in this recent incident 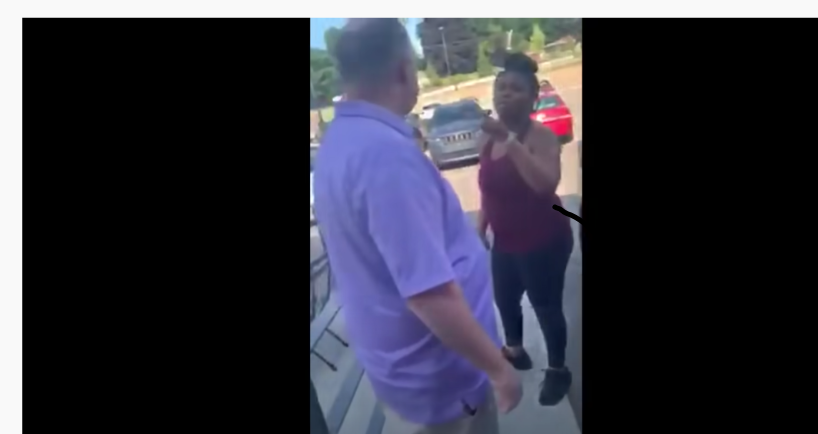 Missteps and bad decisions by everyone in this recent incident almost created a fatal outcome.  To summarize, on July 1, 2020, in Michigan, a pregnant white woman was leaving a restuarant as a 15 year old black juvenile female and her mother were walking in, and the white woman and juvenile female bumped each other.  The juvenile felt offended and followed the white woman to a vehicle where the woman’s husband was waiting, all the while loudly demanding an apology.  Juvenile’s mother follows and then joins her daughter to loudly and angrily berate the white woman.  I emphasize in my classes that there will be times when nothing you say or do will make a difference and you will not be able to successfully or effectively de-escalate a person, 1) When a person is highly intoxicated by alcohol or narcotics, 2) when the person is highly agitated and angry, enraged, 3) When the person has an agenda of some type.  This incident is an example of #3, a mother/daughter team with an agenda to bully, be confrontational, and cause a scene.

The Juvenile starts to record a what ends up being a 3 minute video, here it is…

The video begins with the pregnant white woman quietly taking the verbal abuse, her body language is neutral, her tone of voice is low and calm.  The loudest, rudest, most confrontational people in the video are the juvenile making the recording and her mother.  When the white woman tries to speak, the juvenile and her mother yell over her and the woman just stops to let them vent.  She is doing what she can to effectively and successfully de-escalate the situation.

It is clear that as the video begins that the woman had already tried to walk away and was followed by the juvenile and her mother.  The mother stands in the way of the woman and initially keeps the woman from getting into her vehicle to leave.  The woman calmly mentions that point, and the mother steps aside.  Up to this point in the video, who are the loudest, most confrontational, name calling, obnoxious people?  The people creating the video.  There was clearly no effort on the part of the juvenile or her mother to even consider the remote possibly that the bump was just an innocent bump of 2 people trying to get through a door at the same time, they act as if the woman deliberately and maliciously chose to bump into another person.  The mother/daughter team loudly demand an apology and a reason for the pregnant woman “violating a 15 year old”.

The woman’s husband comes to open the door for his pregnant wife, and the mother/daughter team now resort to name calling.  The woman gets into the car and her husband closes the door, then stands there saying NOTHING but looks at the mother who now points a finger in his face and angrily says, “You say something I’ll beat your white ass too!”.

The man finally asks who the fuck they think they are, in a low, calm tone of voice of someone who is shocked at the idiocy of the situation.  He turns to walk away and they mother/daughter team begin to call the white couple racist.  The man stops at hearing that and turns to face them and begins to deny such an accusation, and the daughter shouts him down and says his wife is racist because “she bumped into me”.

By now the pregnant woman is at her wits end, she is pregnant and stressed, and something I emphasize in my classes is that the longer you are in a stressful situation, the higher the probability you will say or do something that will escalate the situation.  Up until now the video only proves how much the white couple tried to calmly de-escalate the situation and go on the way, trying to avoid confrontation, using calm voices and non aggressive, non confrontational body language.

The pregnant woman is going back and forth with the mother as her husband returns to the driver’s seat.  Her tone of voice is now of frustration, she tells the mother that she can’t just go around accusing people of being racist, the mother just repeats over and over again while waving fingers in the pregnant woman’s face, “Why did you bump her then?”, “Why did you bump her then?”, “Why did you bump her then?”,  acting as if it were a deliberate action.  The woman catches herself getting frustrated, and slows her speech and changes her tone, and calmly tells the mother that she is sorry that the mother must have had some experience in her life to cause her to be so hateful.  The mother continues to be loud and obnoxious.  The woman rolls up her window, again trying to de-escalate by creating distance and barrier between her and the mother.  The juvenile starts to walk away, her phone still recording video, as the car begins to back up to leave.

Suddenly she calls out to her mother, who apparently felt the need to go stand behind the vehicle as it backed up.  The mother chose to stand behind the vehicle to not let the white couple leave without having the “last word”, to continue the harassment, bullying, antagonizing and confrontation.  The mother can be heard slapping the back of the vehicle once and then 2 more times and yelling “I’ll beat your fucking ass!”.  Unfortunately now the pregnant woman has had enough and comes out of the vehicle with her gun drawn and pointing at the mother.  The mother then raises her cell phone to record video and it’s THAT 1 minute video and image, a white woman holding and pointing a gun at the camera,  that the media is splashing all over social media and main stream media.

The mother continues to taunt and antagonize, while the juvenile calls out to her mom to just stop.  The pregnant woman gets back into the vehicle with her husband and they slowly drive away.  As you may know, the white couple have been arrested and are charged with felonious assault.

Missteps and bad decisions by everyone in this recent incident almost created a fatal outcome.  In my experience, attorneys NEVER used such video in court because it CLEARLY shows the major contributing factor the mother/daughter played in this situation.  I strongly believe the white couple will end up pleading to just a misdemeanor charge such as brandishing a weapon… Up to 90 days in jail and up to $100 fine.

I am calling this mother/daughter duo a “team” because I have had experience with dealing with such things during my 20 year career.  In fact, this is not a rare phenomena, unfortunately such teams are rather common.  One incident I remember was when I came upon what I initially thought was 3 teenage girls fighting in the late afternoon by the bus stop.  Long story short, I soon discovered that it was a mother/daughter team that had gone looking for this other teen girl and when they found her getting off the school bus, both mother and daughter began to physically assault the teen victim.  Several witnesses came forward at the scene to tell me what had happened, and I arrested both mother and daughter for assault. They were both convicted of simple assault.

Missteps and bad decisions by everyone in this recent incident almost created a fatal outcome.  These days, unfortunately, no one considers that an innocent, accidental bump in a crowded area is just that, an innocent accident.  People these days are SO quick to be “offended”, THEIR personal space violated, THEIR rights and feelings trampled on.  They immediately lash out in blind fury, and blinded by a deep sense of righteousness.  One lady on twitter asked why the woman didn’t apologize if the bump were an accident, and I responded that maybe she IS a rude person, or MAYBE wasn’t aware that she bumped anyone because she is pregnant and may have been distracted by what ever going on in her mind!  Haven’t we all been distracted and done something stupid, silly, accidental??

Missteps and bad decisions by everyone in this recent incident almost created a fatal outcome.  Why couldn’t the juvenile have been taught to just hold the door open for an older pregnant person?  No compassion or empathy for others, all about self and feeling offended at EVERYTHING and demanding “justice”.  When you allow yourself to get “offended”, you increase the probability that you will do or say something that will escalate the situation, such as following the pregnant white woman to her car and then initially surrounding her.  That is confrontational, antagonistic, and escalation.  Mother/daughter were loud, rude, obnoxious, and name calling, all the while the pregnant white woman silently took it, trying to avoid confrontation and an escalation of the situation.  When she did try to say something, the mother/team immediately shouted over her, shutting her down.  The woman can clearly be seen just shutting up and looking down to just let the mother/daughter team go on and on.

Missteps and bad decisions by everyone in this recent incident almost created a fatal outcome.  The video by the juvenile shows the woman did what she could to de-escalate and avoid confrontation, even her husband kept a calm, low tone of voice and was very non confrontational and non aggressive when he initially came out of the car to open the door for his pregnant wife.  She and her husband were almost out of there, but the slapping and banging on the rear of their vehicle and threats of “beating their ass” was too much.  Unfortunately she reached her tipping point and came out with her gun.

Do not allow yourself to get “offended”, don’t automatically assume someone is out “to get you”.  Take slow, deep breaths when getting stressed and agitated.  Focus on your breathing to stay calm and in control of your emotions.  Unless you can clearly articulate that your life or someone elses life was in danger, do not draw your weapon!