Situation with a loud, rude, obnoxious person mishandled by aircrew on an airliner 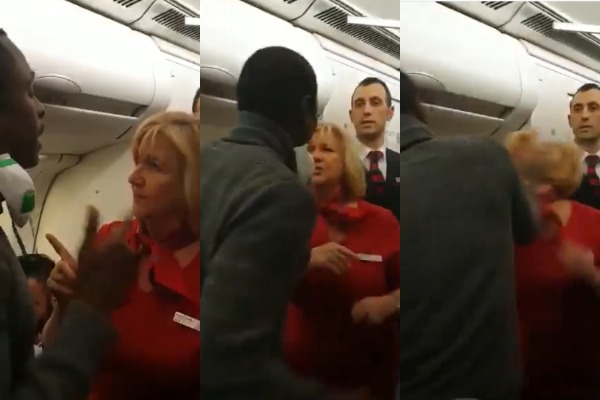 Another sad example of a chaotic situation with a loud, rude, obnoxious person mishandled by aircrew on an airliner.  This video was recently uploaded onto Youtube, and it happened onboard a Brussells Airlines aircraft on March 11th, 2020 apparently during flight.  Here’s the clip from Youtube https://youtu.be/Jr88nEQCJM0

The male passenger who was loud, rude, obnoxious and totally out of control was without a doubt a huge, challenging problem.  I get that he was upset about something, but his behavior is absolutely inexcusable and would not help solve any problem any where on earth.  However, unfortunately, how the aircrew handled the situation is a dramatic example of how NOT to effectively de-escalate a situation!

I am very well aware that there is a lot missing, that the video does not capture all that was done and said leading up to the moment the person deciding to record on video, however you are able to see and hear how the aircrew are trying to handle the situation from that point and it isn’t pretty or effective at all.

First of all, telling a person who is at the level of agitation this passenger was in to “calm down” several times is NOT going to work, and in my experience and observations will actually upset the already upset person that much more!  The aircrew by then must have been totally frustrated with trying to reason with the man, and nothing they said or did prior to the video recording apparently worked because when the video starts the man is VERY upset.  I would dare say that the aircrew obviously did not say or do the right things to de-escalate the man prior the video recording.

And then the female flight attendant, apparently the supervisor, joins in and has several things going against her – The stress of having a totally out of control angry passenger, the stress of seeing her crew unable to de-escalate the man, and the self imposed stress of telling herself that she is the supervisor and will now have to “fix” and “resolve” the situation.  Unfortunately she starts finger pointing a few inches away from the man’s face.

Of the list of things I tell my classes NOT to do when interacting with an agitated person – Do NOT point your finger at them!!!  It is very offensive, confrontationl, antagonistic, and rude!

Telling a highly agitated person, as the flight attendant supervisor did, that “you will listen, and you will calm down” while pointing a finger within inches of the agitated person’s face is NOT going to work.  Pointing a finger in someone’s face AND telling them that if they don’t stop they “will get in trouble” is basically painting yourself into a corner, because now what?  What kind of trouble is the man going to get NOW?  That type of phrase is known as a trigger phrase, which is much more likely to escalate a situation.

I have seen it before, and still see it in my training seminars.  A senior supervisor or leader will stay engaged in a situation with an agitated person because they feel that they have to be the one to fix, or solve, or resolve the issue and situation because they are the supervisor.  But what happens when you, as the supervisor, are NOT being effective and making any progress?  It’s time to disengage before you say or do something that will escalate the situation and have one of your team try while you break away and take a few deep breathes and try to think of a new plan.

The video also is a dramatic example what happens far too often, the people WITH the agitated person are also loud and rude and saying things that very enflammatory, antagonistic, offensive… And rude!  Instead of trying to help settle things down and be part of the solution these people will shoot video and yell and scream.  I’ve been there, and that highlights the need for teamwork, so why weren’t the other flight attendants tending to her to distract her and “separate” her from the agitated man?  Someone could have at least tried to get her attention and de-escalate HER so that the other flight attendants could try to effectively de-escalate the man.  I don’t see much of any type of teamwork by the aircrew in the video, and one thing I learned and try to pass on to my claesses – You can not handle and de-escalate a situation such as this by yourself, and if you try you are more apt to end up frustrated, impatient, and maybe even offended, and end up saying something or doing something that will escalate the situation.

This was a very loud, chaotic situation, a tough situation with an obnoxious person mishandled by aircrew,  but it could have been managed and handled better by avoiding the use of trigger phrases, use of a stern demanding tone of voice, the pointing finger and the crew could have worked together as a team.

For more conflict de-escalation articles with comments and tips – http://gentle-response.com/articles/