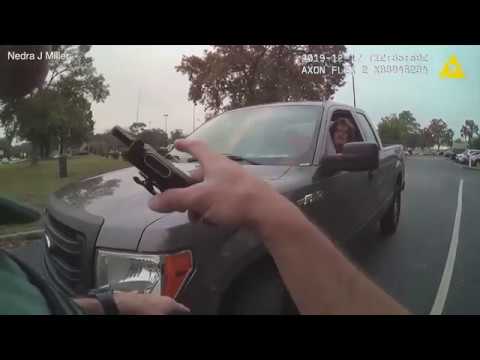 This incident happened in Florida when a teen tried to leave his high school for a dental appointment. He apparently wasn’t even suppose to be at the school that morning but had decided to give a friend a ride to school before going to his appointment. Unfortunately, the deputy assigned to the school as the school resource officer and a school adminstrator did not believe the teen when they encountered him as he was trying to leave the school property, in fact they stepped in front of his vehicle to stop him. Pride and Ego will surely make you say or do something that will escalate the situation.

As a former police officer who has been in similar situations, I shook my head as I watched the bodycam. My department has a policy and procedure for a majority of situations where if we know the identity of the subject we are dealing with, and that subject decides to flee, especially in a vehicle, we let the subject go and just write it up to get an arrest warrant later. No need to put anyone’s safety at risk by pursuing, or jumping into the fleeing vehicle to struggle with the driver, or jumping on the hood, or stepping in front of the vehicle.

One of the quickest and surest ways to escalate a situation is to develop tunnel vision and let your pride and ego run wild and out of control. If you feel like you have to have the last word, or have to “win”, have to be “right”, you are going to struggle with de-escalating a situation. The officer and the school administrator in the incident just absolutely could not and would not consider that the teen was authorized to leave the property, and because they felt their authority was being challenged and scoffed, in my humble opinion THEY escalated the situation by their words and actions. This whole thing could have been resolved in about one minute had the school administrator simply called the mother for confirmation while the officer spoke with the teen.

Even if they chose not to call the mother at the time, they already knew who the teen was and simply could have let him go pending further investigation (a phone call to the mother) and determination of consequences if any. I have no idea what Florida law and school policy and procedures are for dealing with teens trying to leave school property, but I find it interesting, and consider it a liability minefield, if officers and school admin are authorized to physically prevent a teen from leaving the school property.

I’ve seen this behavior in my training seminars too, students going through a dynamic scenario will get stressed and “sucked in” and when my role player tries to “leave”, the student or students will block them in… And thereby escalate the situation.

Pride and Ego will surely make you say or do something that will escalate the situation!  I’ve said it before and I’ll say it again, it is a very normal and natural for people in positions of authority to feel offended when they sense that their authority is challenged or ignored or scoffed at. If you are even a parent, you know exactly what I am talking about, how did you feel when you realized your child had ignored your instructions to clean up or do chores? You felt offended and felt like you HAD TO DO SOMETHING to let your child know who is in charge, who has the power and authority. Do you remember when that guy or gal first got promoted and all of a sudden it seemed like they became a totally different person, a jerk even? They felt that EVERYTHING was a challenge to them and they over reacted. I saw it in the military, in the police, and still see it everywhere and hear about it from friends in all different career fields. When people are convinced of their righteousness, power, and authority, they behave just like the officer and school administrator did in this incident with the teen.

You MUST keep your pride and ego in check during contact and interaction with someone otherwise YOU will end up saying or doing something that will escalate the situation.

For more comments and tips on Conflict De-escalation, click here