Are you training to “stay in the fight”? 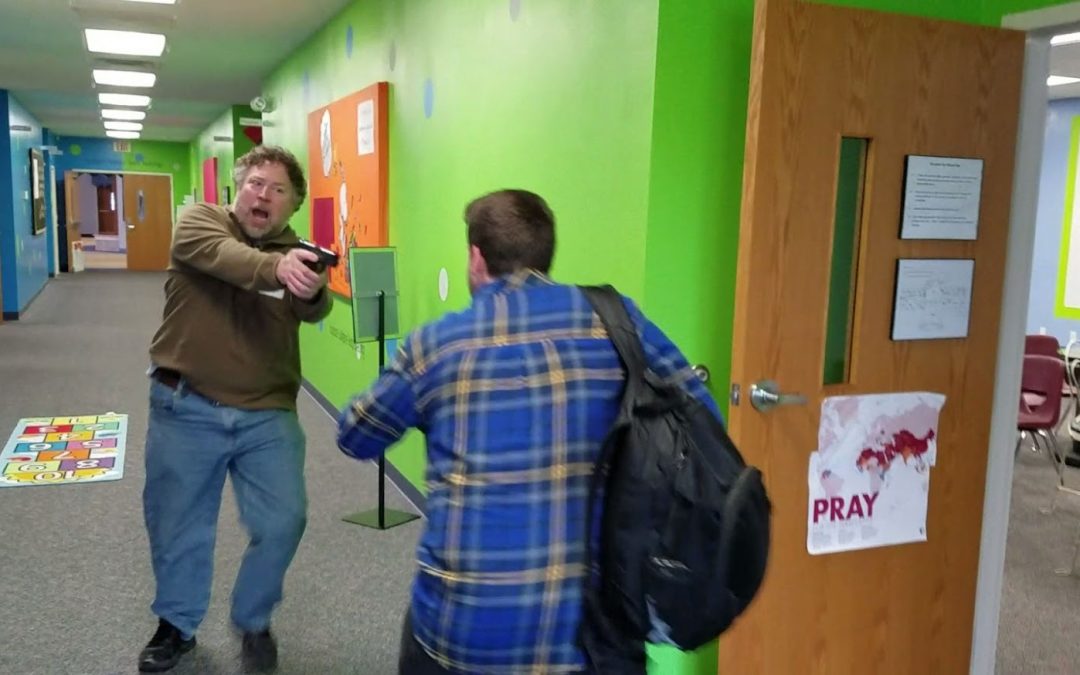 I created a training program in 2017 for armed church security personnel, and call it Decision Making Drills. I had observed that a vast majority of armed church security personnel go to the range a lot, and they shoot, and shoot, and shoot, and shoot some more… And that’s it. They are not working scenarios together to develop team work in a stressful situation, nor are they going through dynamic shoot/no shoot scenarios, and they are not thinking about what happens AFTER the shooting stops! Who’s calling 911? Who’s checking for injured and doing first aid? Who’s evacuating that side of the building? So I created Decision Making Drills.

My DMD program has picked up some momentum lately, especially after the recent shooting in Texas at the West Freeway Church of Christ. I have observed a phenomena that seems to manifest itself with all the armed church security personnel my team and I have worked with, and I call it the “He got me” syndrome. Basically, students are suppose to go through a scenario and when my instructor/role player produces a weapon and creates a deadly force situation, the students are to draw their weapons, simulate shooting, and then go into after-action procedures such as getting on the radio, checking for injured and rendering aid, calling 911 and so on. But I have observed that 9.9 out of 10 teams, as soon as my instructor/role player produces a weapon and simulates shooting or stabbing them, everyone just deflates and basically quit, figuring the scenario is over.

Here is a short 18 second video as an example. I took out the sound and I have cropped the video image to hide faces, but you can see what happens after my instructor/role player, in the black shirt, produces a gun…

The exercise was to engage the threat, and go into after-action procedures, and this phenomena isn’t just these 2 students either, it is most everyone that has gone through the DMD course with my team. I have seen this phenomena over and over again, especially after my instructor/role player pulls a weapon and say the magic words, “I got you”! The students quit and stop as if the scenario is over, because “He got me”. It just highlights the need for thorough, consistent training in all aspects of a shooting incident for armed church security personnel.

I believe that this “He got me” thinking was ingrained into us as children, when we would stop and play dead when “he got me”. Even today, paintball game rules state that a player is “dead” upon being hit and is to clear the field. When I was in the Army playing war games with the laser engagement system, you were “dead” when your system went off and you were to stop what you were doing. So are you training to stay in the fight? Because we may still be conditioning people to quit and “die” when “he got me”.

When I was a police officer I was trained to stay in the fight, to never quit, to hang on till backup arrived. But there was this one time when that “he got me” thinking took over for a quick moment… We were up at Grattan Raceway, in Belding, MI, going through training for emergency vehicle operations, so, high speed driving around the track chasing a “bad guy”, cone exercises, traffic stops and so on. I initiated a stop on a gray Dodge Intrepid, and as I approached the car the driver suddenly sprang out and took off running. As I took off after him I suddenly felt 2 sharp stings in my back, and I realized I had been shot in the back with simunitions by the driver’s partner, who was laying low in the front seat. I spun around as I dropped to the ground and returned fired. The main takeaway lesson there was NOT to assume there was no one else in the car, and I never forgot that lesson.

The other, more personal, lesson was to STAY IN THE FIGHT! The fact is, when I got hit by the 2 simunition rounds, my initial thought was “damn, he got me”. Yes, it really was. As I was collapsing to the ground to play dead, it suddenly really HIT me to STAY IN THE FIGHT, and so I drew my weapon and spun around as I collapsed to the ground and returned fire. At the time of this incident I had been a police officer for at least 10 years. If this nefarious, evil, debilitating thought of “he got me” can still sneak into my conscious thought, even with all my training and reconditioning, how much more challenging will it be for a properly licensed conceal carrying civilian to fight through that thinking and stay in the fight, especially since they do not have anywhere near the amount of consistent training and conditioning that police officers have?

Are you training to stay in the fight? I believe the answer is train, train and train some more! You have to recondition yourself to fight to win and survive, convince yourself that you will go home safe and in one piece to your family! Dynamic, realistic scenario training is key to develop stress inoculation, muscle memory, and self confidence. It is only during simulated situations that you can bring up that “he got me” thinking so that you can smash through it, over and over again! Are you training to stay in the fight?