Do you find yourself fixating and creating your own tunnel vision?

Do you find yourself fixating and creating your own tunnel vision?  Maybe you have noticed a “suspicious” person, are you now so fixated on that person that you don’t notice people walking by and greeting you?

This is actually a common phenomena when the human body starts to go through some stress, the eyes and brain will want to focus on the source. You may be familiar with accounts of people who have had guns pointed at them, such as during a robbery, and they will recall the muzzle and barrel of the gun in every detail, every scratch, the color, and so on, and barely be able to describe the person pointing the gun at them.  Fixating.  Tunnel vision.

And that is why different witnesses to the same incident will have varying degrees of accuracy because of different things that they focused and fixaged on during the incident.  Everyone reacts and responds differently, but you can fight that tendency and phenomena by “keeping your head on a swivel”.  Police officers and handgun enthusiasts are taught to turn their head and look around, left and right, after delivering shots on target to break that fixation, break that tunnel vision.  If you don’t do that simple exercise on the range you may condition yourself not to do it in real life, and miss a deadly threat coming up beside you.  Do you find yourself fixating and creating your own tunnel vision?

I observed this fixation about a year ago at my church as I waited for my family to arrive.  I was at an upper level looking down at the entrance as people were coming in, and one of the church security personnel (CSP) came over to chat.  A few moments later the CSP pointed out that they were keeping an eye on a man who was about 40 feet away from us, also on the upper level looking down at people come in.  I looked at this person and in moments saw no reason to worry about him.  I asked the CSP why they were watching the man, what had the man done to be watched, and CSP commented that the man was just standing there looking at people, and then CSP asked if I didn’t think that if the man was waiting for someone or family that they would have arrived by now?  I just looked at CSP for a moment and then pointed out that I am also just waiting for my family, that hadn’t arrived yet, and that was why I was also just standing there but happen to also be chatting with CSP.

There was a pause as it seemed that CSP was taking that information in.  And a few minutes later the man’s family did arrive, as did mine.  The CSP meant well, was trying to do a good job, be vigilant, BUT this is what can happen when someone fixates on a possible issue and ignores the other signs that the “issue” is in fact NOT an issue.  When I looked at the man, I noted his relaxed body language, there were no furtive movements by his hands, he was casaully leaning on the railing looking down at the crowd and this phone.  He exhibited no stress of any kind and I quickly determined there was no need to be focused on him.  Just because a person is standing there alone does NOT mean they are up to no good, you MUST look for other signs and clues!  Just because someone has a backpack does NOT mean they are up to no good!  You must a continuum of clues and indicators to justify going to the “next level” of attention or if necessary, next level of action. 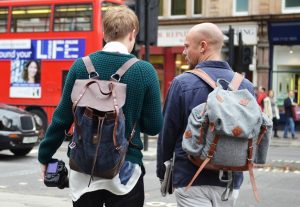 Do backpacks make these men suspicious?

About a year ago or so, when backpacks and having a “backpack policy” at churches seemed to be all the rage everywhere, there was a guy at my church who also sat at my table for the weekly men’s breakfast.  He pulled me aside one morning to tell me that at least 3 times a week he will be stopped on his way into church to let someone check his backpack, and this went on for several weeks.  Usually by a different security volunteer at the church, sometimes by the same one who checked him the week before, and they acted like they had not seen him before.  This guy was on staff at the church too, did I mention that?  A church employee… He stated the security volunteers were polite and friendly, but he was struggling to NOT feel like he was being picked on and targeted.  I know the church security volunteers, and I want to believe that they were just trying to be vigilant and pro-active and meant well, but exactly WHAT was our church staff member doing to warrant more than just a glance and a greeting?

Do you find yourself fixating and creating your own tunnel vision?  Is it really a suspicious person to keep an eye on?  When you see someone that catches your attention, take a moment to see if there are other clues or indications that warrant more attention!  Don’t just fixate!  You may miss an actual threat walk right by you!  Does the person look nervous?  Do they look like they are trying to avoid being observed?  Have a hood up over their head? (A lot of young people do this anyway, so again, that in itself is nothing!) Are they fidgeting?  And on and on,  but there are no black and white lists of what a suspicious person or bad person will do at any given moment, and every situation is different and very fluid.  You have to analyze and make decisions based on what you are observing at that moment, but you have to make sure you are not fixating and spending too much time over analyzing a person, trying too hard to notice something else.  It’s either there or it isn’t.