How the Jazmine Headley incident could have gone differently 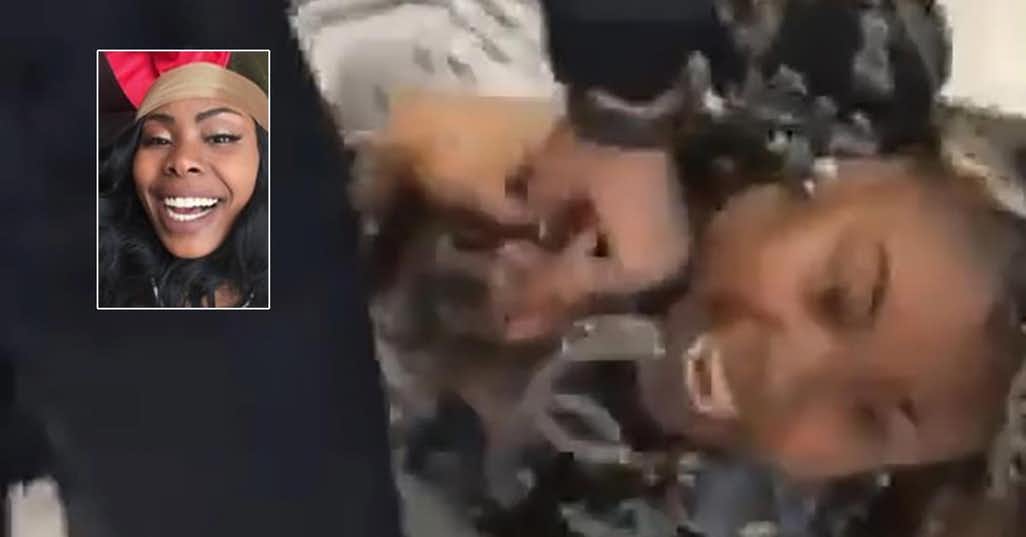 How Jazmine Headley incident could have gone differently.  My team and I were in NYC last year with a client when this incident happened. Everything I read at the time pointed to the security guards on scene actually ESCALATING the situation before they called the police. Jazmine Headley was in a crowded waiting room, and because she was unable to find a seat, was sitting on the floor with her child when approached by security and told she could not be sitting on the floor, that she was blocking an aisle/passageway or something to that effect. I wondered at the time if the security guards had bothered to look for a seat or another option for Jazmine other than to simply tell her she could not be sitting on the floor. I am pretty confident that HAD security offered her a seat or a way to not sit on the dirty floor she would have been grateful and appreciative, and there would have been no incident, the situation would NOT have gone sideways. One of the top theorums in Conflict De-escalation is that people want options. In fact, security may have violated several de-escalation theorums when they made contact with Jazmine, such as not asking her but telling her not to sit on the floor, then they probably didn’t explain why, and they didn’t give her options. And all that amounts to not treating Jazmine with dignity and respect, which happens to be the very first thing on the list of de-escalation theorums: People want to be treated with dignity and respect.

How could this situation have gone in a perfect world, where people agree to disagree and try to help each other and are not so easily offended? To start with, the security officer, upon noticing a young mother and child sitting on the dirty floor, could have tried to feel some empathy and compassion and looked around for a seat, or maybe even asked around if someone would give up their seat for the mother and child.

Let’s say the officer was not able to find a seat in the crowded waiting room, but saw a spot where the mother and child could sit that would not be in anyone’s way, maybe the officer could have pointed that spot out to Jazmine and explained why she and her child should sit on the dirty floor “over there”, and maybe even offered to have them sit on something soft, such as maybe a first aid blanket if available.

I strongly believe there is an enormously high probability that had Jazmine, already frustrated and stressed about taking a day off from work to sit for a long period of time in a crowded, noisy, waiting room with her child who was probably getting fussy, been approached and contacted as I described she would have actually felt relieved and very appreciative for the little empathy and compassion shown, even IF she had to still sit on the floor at another side of the room. And imagine had the security officer also given the child a candy or something to play with to keep him occupied and not fussing? 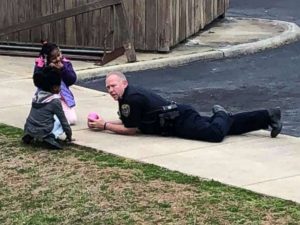 Cop playing with kids, a great way to de-escalate a situation

But unfortunately the Jazmine Headley incident went down the way it did, and apparently 22 security staff resigned or were fired and Jazmine Headley has accepted a $626,000 settlement. You can always fire an employee who mishandles a situation, but YOU are left to rebuild your professional reputation, AND it may also cost you a few coins. So why not get ahead of it and make sure your personnel are trained to avoid doing or saying something that may turn a situation into a critical violent incident?

The article states- “The city’s most notable moves in the wake of the episode involving Ms. Headley included the introduction of mandatory training in how to de-escalate tensions for the security guards who work in the city’s public benefits offices. Twenty-two security guards at the city’s welfare agency resigned or were fired”. There is a very good chance that the “mandatory training” is not much more than a lecture presentation and some scenarios and skits done in front of the class. You will not learn how YOU will handle a stressful interpersonal contact and situation from just sitting through a lecture or watching a short scenario/skit at the front of the class.

Let’s say that after a showing empathy and compassion to Jazmine and she moves to sit at another spot in the crowded room with her child, that it is determined that she is arrestable for warrants, as was in this case. I have been in this exact situation several times in my career, you know how I handled it? I explained to the subject that based on warrants I was going to have to place them under arrest and asked who I could call to come get the child. And then we waited. There was never any reason to be in a hurry, in a rush, and just go “hands on” and find myself in a tug of war with a child as happened with Jazmine Headley.