Part of de-escalating a situation is knowing when YOU may be escalating it! 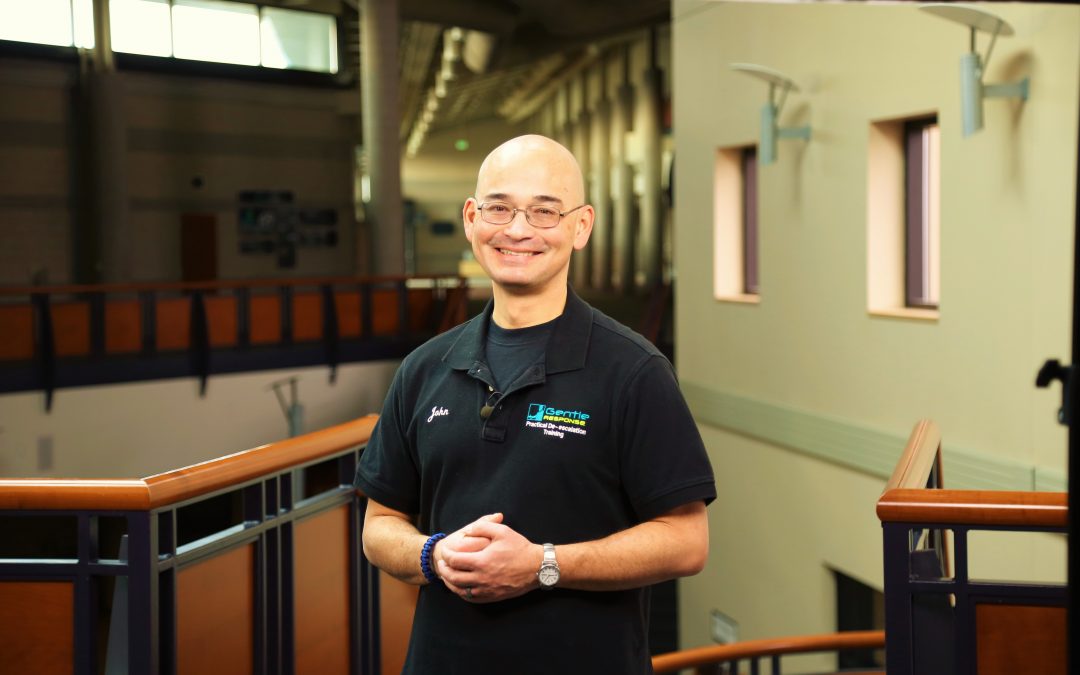 Part of de-escalating a situation is knowing when you may be escalating it.   A number of years ago a friend of mine was sharing with me an incident that happened at a church. The security volunteers were made aware of some people possibly attempting to break into cars in the parking lot, and they left the building to go out and confront the subjects. The subjects were not located so no contact was made. I knew that the security volunteers were good solid people but with no background, training or experience in dealing with criminals so, as an active duty police officer at the time, I commented to my friend to pass on to the team to be careful about when they leave the physical building and go out into the parking lot to confront someone. I pointed out that if contact had been made and something bad happened, if some one got hurt, THEY could be viewed in the eyes of the law as having been the aggressors for leaving the building and going out to look for the subjects.  I pointed out that staying back and keeping the subjects in sight and updating dispatch as the police respond may be a good option to consider.  I shared that as a police officer I prefer to have someone updating me as I arrive on scene.   I heard later that the attitude and response to my word of caution was that I was not the only person who knows how to handle a situation… Wow… I just shook my head and shrugged, what else could I do?

As a police officer I had consistent training every year in decision making in all sorts of situations and scenarios, from shoot/No shoot scenarios to deciding which tool on my belt was the most appropriate for the situation, such as pepper spray or the baton or taser.  I also trained to use my head to THINK, make risk assessments continuously, to know when to get involved, how to get involved, and what tools I needed to get involved with a situation.  Whenever I went into a situation dealing with people I had to think of as many possible outcomes and options as possible and continuously update my plan and options almost every few seconds because dealing with people is a very dynamic and fluid situation that can go from zero to lethal encounter in a blink of an eye.  And one of the MOST critical things I trained in was recognizing when to hold back, NOT move in to engage, and to WAIT for back up.

A little research on the web on lawsuits against security guards and incidences from poorly trained people resulted in a ton of stories from across the country.  Let’s take another look at the incident my friend told me about and look at some possible outcomes and possibilities:  Let’s assume it was 2 guys, in their 30’s, volunteering to do security who went looking for a person or persons breaking into cars.  None of the security guys have any background in law enforcement or dealing with criminals, none of them have any training in dealing with criminals, much less dealing with criminals on any consistent basis.  They are not wearing body armor either, but let’s say they have their conceal carry permits and are carrying with permission from the church.  Best case scenario is they find a person or persons snooping around cars and those subjects take off running when they see the 2 volunteer security guys approach.

Let’s say the security guys find someone sitting in a car.  The person does not feel like talking to them or explaining anything to them, and they do not realize the person is in their own car.  Now what are the security guys going to do? They feel duty bound to determine if this person belongs in the car, but the private citizen in their own car in the church parking lot doesn’t HAVE to say anything or explain anything.  It would help but let’s say they are having a bad day and just don’t want to be bothered.   It is a common tendency for people in positions of authority such as security guards to feel offended when their authority is not respected.  What happens if one of the security guards keeps insisting on getting some sort of ID and the person gets angry and hits the security guard in the face?  Now a physical confrontation has erupted.

But what if the 2 volunteer security guys catch a suspect red handed going through someone’s car.  The suspect is in his late teens to early 20’s, been a criminal for the last 10 years of his life.  He starts to flee, an automatic response when petty criminals who burglarize cars are caught, but the security guards feel it is their duty to detain him and try to stop a younger, stronger, meaner criminal, who now decides to fight his way out.  Now a physical fight takes place, and no one has called the police yet, the 2 security guards are on their own and risk getting badly hurt.    What if the suspect pulls a knife or uses a screw driver (common with petty criminals who burglarize cars) and starts stabbing the 2 security guys?  Now what happens if one or both security guys pull a gun and use it on the suspect?  What was just a simple property crime, with no risk to any person in any way, just escalated into a lethal force encounter.

Let’s say the security guys are actually able to detain the younger, stronger suspect but hurt him in some way to end up being able to control him.  What was a simple property crime with no risk to any person escalated to a physical confrontation with a person injured….you don’t think a lawsuit will come out of that?  I can easily see the lawsuit claiming negligence on the part of the church for allowing volunteer security guards with no training on handling, apprehending and detaining criminals to feel they can go lay hands on someone.

Let’s say the bad guy stands his ground and pulls a gun first and starts shooting.  The security guards never called the police to at least get them started before running out into the parking lot, and now in this scenario they have a bad guy shooting at them.

A very large part of de-escalating a situation is knowing when to act and when NOT to act, but a lot of people will not even realize or consider not acting as an option, and end up inadvertently escalating a situation.  Considering that option comes from years of training and years of experience.

I’ll close with a personal story –  I was working the security cameras one evening a year ago at my church, and on the cameras I observed a subject approach my car, peer around inside and try the door handle.  I was about 40 feet and 2 doors away from him, and was carrying my handgun.  I sat there and called for other security guards on the radio and continued to observe the suspect, who eventually walked away without entering my car.  Don’t you think I wanted to rush out there and confront him?  I sure did, but I knew the right thing to do was to sit tight.  It would have just been a simple property crime anyway.