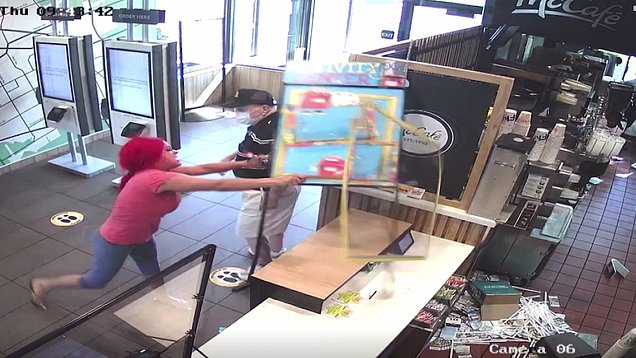 High, VERY high, on the list of things NOT to do when interacting with an angry person is – Do not point your finger at them! This recent incident at a McDonald’s in Indianapolis has several teaching points. There is no sound, but watch the body language…

I timed it. From the time the manager came up and addressed the pink lady, to the time she slapped the pink lady, is roughly 23 seconds. What ended up being a 5 minute video of chaos and mayhem could have been de-escalated effectively and successfully in the those 23 seconds.

What usually happens when anyone has an issue with their order at a fast food restaurant is they either get their money back, or more often than not, they get the food they wanted in the first place, done properly, at no extra cost. Unfortunately that is not what happened in this incident.

The customer comes in after realizing her order is wrong, and there really isn’t any way to know how upset she was because she does wait rather patiently for an employee to finish ringing up another customer. When the other transaction is completed, the customer now demonstrates her unhappiness by tossing her bag of food towards the employee behind the cash register, followed by flipping the receipt in that direction too. Rude behavior to be sure, totally unnecessary, and it could have ended here with giving a refund or getting the order right.

The manager no doubt wanted to defend her staff behind the cash register, who was the original “target” of the tossed food bag and receipt. But the manager should have had more self discipline and self control to avoid the finger pointing and the verbal assault that she blasted at the customer. Quickly taking over by grabbing the food bag and receipt, the manager should have held her tongue and replaced the wrong order with the correct one. It was most likely a busy day with cars lined up in the drive through, and the manager really did not have time for delays and issues like this. Just replace the order with the right one as quickly as possible and get the customer on their way, that is normally what happens maybe hundreds of times a day across the country, but every now and then there is a situation like this where the stress of the day gets to an employee, and like this manager they end up saying or doing something that escalates a situation.

Had the customer just stopped right there and called the police after being slapped, she absolutely would have had a simple assault case against the manager which was all caught on video. But because SHE became totally unhinged and violently out of control, damaging property and ending up putting a gash in the head of another employee who was trying to get away, the police are now looking for HER with charges of destruction of private property and felonious assault. She made a bad situation even worse with her outrageous behavior.

The manager may have escalated this situation with the finger pointing, head bobbing, angry words and angry tone of voice, but the customer showed even less self discipline and self control, and a lack of any regard for other people or property. Several times during her tirade and violence she paused to interact with an older man who was trying to de-escalate the situation and get her to stop being so violent, and during those times she could have taken a breath and taken control of herself but she did not. She would take a moment and then become violent again, only leaving when she ran out of things to throw. 3 minutes of utter chaos, mayhem and violence.

Finger Pointing Escalates Into Trashing Of McDonald’s.  Take a slow, deep breaths when you feel yourself getting upset about something or someone. Those slow, deep breaths will help you stay as calm as possible, and get critical oxygenated blood to your brain so that you can think clearly. Think clearly of your actions and possible consequences, and avoid saying or doing something that will escalate the situation.

The wrong order was just a simple mistake from a busy day, don’t take things so personally, it was not a direct, specific attempt to ruin your day. Showing some empathy and compassion toward your fellow man would go a long ways in helping make this world a more peaceful place.

Click here for more articles how conflict de-escalation knowledge, training and skills would have made a difference

Click here for Youtube channel with informational videos on incidences where conflict de-escalation knowledge, training and skills would have made a difference