Do you get so offended that you react emotionally? 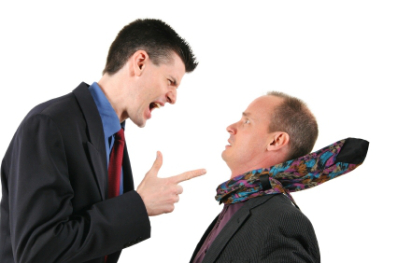 Do you get so offended that you react emotionally?   If you do, you are going to struggle greatly when it comes to trying to de-escalate a stressful encounter with an agitated, often times offended, person. Because when YOU are offended, and you allow yourself to react and respond emotionally, you are most likely going to say or do something that will escalate the situation, and bring a great deal of embarrassment upon you and maybe your employer, or it may spiral out of control into a physical fight.

For people in positions of authority, it is a very normal reaction and response to feel offended and disrespected if they sense that their authority is being challenged, ignored or even scoffed at.  A recent incident in Florida between a police officer and a bicyclist may be a sad, dramatic example of such a situation.  Click here for the story.  Here is a link to a blog article of the incident with video from the police officer’s body cam and from his cruiser.  I wasn’t there, but I have certainly been in very similar situations.  As a retired police officer I know that it is normal for there to be up to 30 seconds of silence prior to the audio picking up on video, that is the design of most of the police systems.  When the video is activated to record, the 30 seconds prior to that moment are saved in video only, no audio.  There is some question now about what was said or not said prior to the audio being recorded, but I want to just analyze the incident at basic face value, based on the videos and what is on the police officer’s report.

Again, as a retired police officer I can tell you I saw it among some police officers, and I definitely still see it in the world around us now – People who get so upset and offended that they end up saying and doing things they shouldn’t.  And if they are in a position of authority, they will do things just “because they can”, they will use their authority to showcase their power and influence.  In this incident with the police officer and bicyclist, the officer observed the bicyclist run a stop sign, and in the body cam footage you can see that he gestured at the bikers to pull over or come to him.  When they continue on, he takes off after them with lights and sirens.  Within moments of reaching the bikers, he has them stopped and then is going hands-on with one biker and placing him under arrest.  I believe the officer was so offended because he convinced himself that his authority was being mocked, scoffed at and ignored that he over reacted.

Beginning with the officer’s “hand gesture”… Not much more than finger waving.  At the distance the bikers were at, say at around 30 feet, and the speed they were going and focus on riding and taking the turn, is it really that unbelievable that they did not see the officer waving his fingers at them?  I know that we have ALL been in situations where we did not notice something that was literally “in our face”.   The officer’s report also states that he “yelled at the bikers to stop” but they “smiled and continued”, and “turned to look back at me, acknowledging my presence and my command”.

While I can not see the bikers looking back in the video, what really struck me was the officer’s use of the description and phrase that the bikers looked back and he is convinced that they acknowledged “his command”.  This is where I believe the officer became offended and overreacted.  I can remember an incident where I pretty much did the same thing… I had pulled over a car and there was a backseat passenger that gave me grief.  I tried to ignore the backseat passenger, pointed out to the person that I only had to deal with the driver, but after a few more minutes it got to the point that it was so distracting and aggravating that that my authority was not being recognized, obeyed and respected.  I finally lost patience and loudly announced that I was going to write the backseat passenger a ticket for not wearing a seatbelt.  The problem is, there is no law in Michgian that an adult in the backseat MUST wear a seatbelt, not like there is a law for children and babies to be properly secured either by the seatbelt or a car seat.  It was while looking for the offense code for that nonexistant infraction that I slowed down, calmed down, and realized that I was overreacting.  I told the driver to just go.

The officer’s report states, and the video shows, that the officer pulled alongside the bikers and yelled at them to “pull over”.  The video shows the sirens were blasting at the time the officer yelled at the bikers to pull over. Folks, from my experience, I can tell you that when you are next to an emergency vehicle with it’s sirens going, you can not even hear yourself think, much less hear another person sitting in a vehicle yelling at you!  But because the bikers kept riding on for a few moments, the officer can technically accuse them “fleeing and eluding”.  And because of the confusion of the moment, the biker initially “resists” but then allows himself to be handcuffed and taken into custody.  Of the 2 bikers, the officer only focused on this one biker, the “one in the yellow shirt” who the officer stated in his report, “looked at me and put his hand up”.  Within moments of stopping and making contact with the bikers, the officer moves in to take the one biker into custody.

We have all been there, feeling upset, frustrated, impatient, disrespected when our authority is questioned or challenged.  If you are parent, you definitely have been there too, when your child ignores you and house rules, doesn’t do chores or pick up their room, lies about doing their homework and so on.  Your authority and position as a parent has been questioned and challenged and you feel like you have to “do something” to let your child know who is in charge, who has the power to ground and restrict and punish.

This incident with the bikers is another example of why it is so critical to maintain self control to avoid doing or saying something that may escalate a situation.  We have all been there, and I’m sure everyone one of us can look back at a moment in our life where we felt upset and over reacted, it’s part of being human, but just because it is a normal part of being human does NOT mean it’s okay to react and respond emotionally!  When you feel yourself beginning to get agitated, slow down, take deep breathes, and really think and assess the situation – Is the issue bothering you really “worth it”?  Basically, pick your battles.  I learned to do much better as a police officer, and I can tell you there were many times I walked away with people laughing and pointing and so on because there really wasn’t anything I could do, no matter how angry I was or how much I really wanted to “do something”.

Do you get so offended that you react emotionally?   If you do, you are going to struggle greatly when it comes to trying to de-escalate a stressful encounter with an agitated, often times offended, person. Because when YOU are offended, and you allow yourself to react and respond emotionally, you are most likely going to say or do something that will escalate the situation.