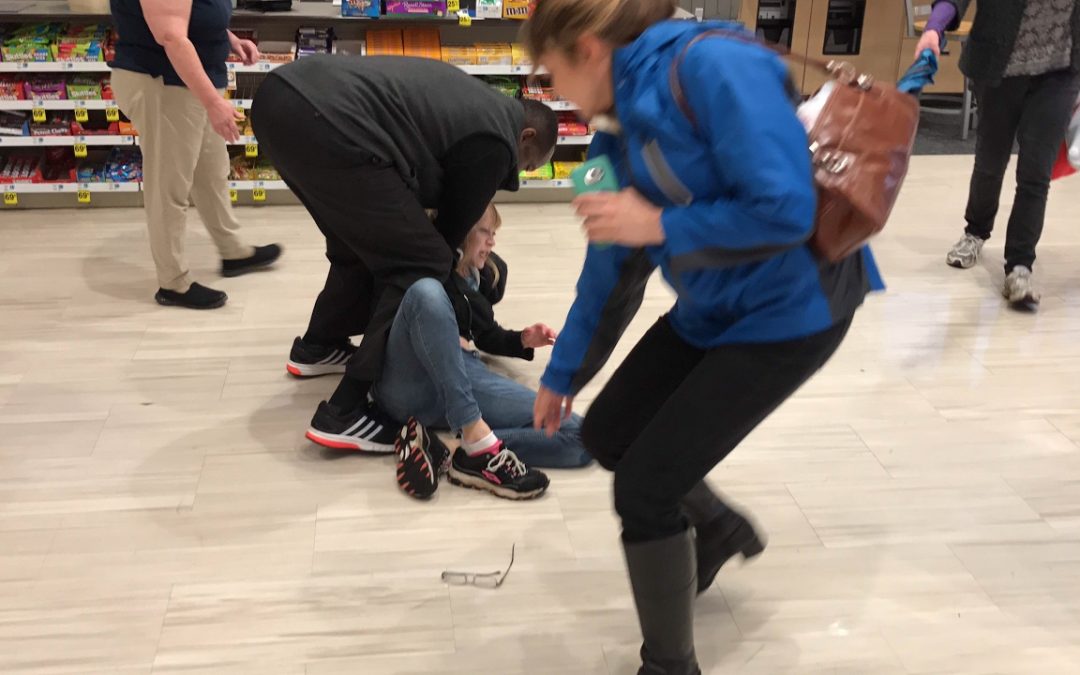 Dealing with a loud, rude, obnoxious, assaultive person can and will be challenging, and this video is a great example of keeping your cool with someone like that to avoid escalating the situation.

So I stated that this video is a great example of someone keeping their cool to avoid escalating the situation, and you may be wondering just how much more escalating can there be?!  Well, the loss prevention officer could have lost his temper and really put the beat down on her, especially when she tried to knee him in the groin.

The loss prevention officer kept his tone of voice pretty controlled, he had a raised tone of voice but he never lost control, he didn’t just start yelling at her.  He had the presence of mind to give her verbal commands in an effort to de-escalate her, telling her to stop resisting, to wait for police, explaining to her she can not be shoplifting and that the police will come and deal with it, and then she started to physically assault him.   He did not put the beat down on her, even after she tried to knee him and took several swings at him, he used enough force to keep her under control and detain her.  Even as he physically restrains her he is then yelling at her to stop it, to stop resisting and fighting.

The suspect’s actions is very common in my experience, they will create a commotion, they will accuse and blame the loss prevention officer of “starting it”, just like this girl was accusing the loss prevention officer of having assaulted her first in the parking lot, totally ignoring the point that she is shoplifting.  Shoplifters will create a scene and act like a victim, and even in the video you see one person attempt to come to the girl’s aid.  That person is held back and because of her actions the LP officer asks her if she knows the suspect.  You can also hear a person calling out for the LP officer to just let her go.  In my experience shoplifters learn that if they can create a big enough commotion, even play the race card, they will more often than not be left alone because LP officers and by-standers are afraid to follow through and attempt to detain a person.

I had a situation a number of years ago, about 5 in the morning or so, almost end of my 12 hour shift, I got dispatched to a fight in progress at a store between a shoplifter and LP officers.  I arrived to find an “unconscious” black female laying on the floor.  LP officers stated they were JUST fighting with her and when she heard someone comment that I was pulling into the lot she suddenly went limp and was now pretending to be unconscious.  We all had experience with actual unconscious persons, so we knew she was faking it.  I called for an ambulance anyway.  She played the game all the way to the hospital until they started to put smelling salts under her nose, then she would stir, and then go into violent convulsions for a moment and then settle back down to being “unconscious”.  After consistently getting smelling salts she decided to remain “awake” and explained that she suffered from seizures.  Again, everyone had experience with actual seizures and so on, it was all a game.  To make a long story short, it turned out that she had played this game before, act like she was having a medical issue, be taken to the hospital and when the police left because no one wanted to just sit around and baby sit her she would just up and leave.  I wasn’t going to let her get away with it so I got some over time as I sat there till they released her so that I could take her to jail (The hospital did not make me wait too long before releasing her!)

This LP officer apparently went out to the parking lot to make contact with this girl and then brought her back into the store.  I thing that is AWESOME.  One thing was a pet peeve of mine as a police officer was dealing with corporate rules that spelled out that LP officers and employees were not to follow suspects under any circumstance or even go hands on with someone under any circumstance.  At least that was how the rules were explained to me.

I always encouraged the LP officers and employees to, at the very least, go to the door or window and watch and see what color vehicle the suspect or suspects get into and which direction they went!!  Just THAT often times would be all the responding officers needed to catch the bad guys!  And I would like to see corporate rules adjusted to give their people the option to get physical with a subject if the situation warrants it.  For one thing if LP makes contact with a subject and that subject immediately starts to physically assault the LP officer, the LP officer should now have the leeway to defend him or herself and to take down the subject, who initiated the physical contact in the first place.  That’s just my humble opinion.  Too many bad people have learned that all they have to do is create a loud commotion or active aggressive and hostile and they will pretty much be allowed to leave peacefully.

So back to the video, just an awesome job by the LP officer of keeping his cool, did what he could to de-escalate and detain, and used just enough force to stay in control.  This comes from confidence in yourself and what you are doing and why, and that confidence can be gained by realistic and consistent training.

Contact me about training your team or staff to develop the confidence to deal with a difficult person!